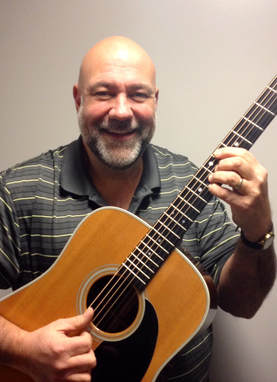 Here is a very personal message about Ron's musical journey:

"My musical journey began at a very young age at Westwood Baptist Church, when my grandfather, who was the pastor, would regularly bring in gospel quartets that sang at our church. I just loved how their voices beautifully harmonized as they proclaimed the word of God.

As I grew older I became exposed to many different styles of music. I was particularly drawn to the sound of the electric guitar, captivated by guitarists who passionately played “screaming high notes”. I knew almost immediately that I wanted to emulate that sound!

I began taking guitar lessons at the age of ten at Penguin Music store studying under Rollie Smith. I learned the value of a curriculum based systematic approach to studying the guitar. Several years later, I began to study under John Justus, who reinforced the value of a curriculum based lesson format, injecting additional music insight as well. I also studied under the tutelage of Dan Faehnle, who guided me through the murky waters of improvisation and theory.

Music has had a profound impact on my life. During my high school years, I played in the jazz band in various musicals and variety/talent shows and also sang in the choir. I enrolled in music classes, including music theory. As an adult, I worked in music retail (Ron’s Music, Peeler Music) for over twenty years, engaging in consultative selling of new and used musical instruments. Over the years I performed with many groups in the area (After Six Band, Chaser, Fossil Creek, Hooligan, Mental Floss, Momentum, Murphy’s Law, Vision) and also performed with Bo Diddley at the University of Toledo Student Union and played a gig with Al Rappa of Johnny and the Hurricanes fame.

I began teaching at Forte School of Music in 2006, one month after it officially opened. I have endeavored to teach my students by utilizing a curriculum based systematic approach, not only for guitar, but for electric bass, mandolin, and banjo. It has (and continues to be) a true blessing to be able to help my students begin their own musical journey.

I would truly be remiss if I didn’t thank my wife Mary for continual and total support of my musical journey. Without a doubt, Mary and our children (Carmen and Paul) have had to make more than a few sacrifices for me to continue on this journey.

In many ways, it seems I have come full circle. Every Sunday I play guitar and sing in the choir at my church (Heritage Baptist Church). I also sing in the church quartet that features Emily Merrick, a former Forte School of Music student.

I thank God for blessing me with the ability and the opportunity  to play and teach music. Won’t you consider embarking on your own musical journey? I would love to help you get started!"
Some of Ron's students on stage: