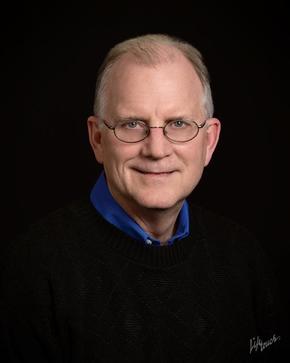 James was born in Bowling Green Ohio and grew up in Toledo Ohio. He first studied cello with Ruth Werchman a cellist in the Toledo Symphony. As principle cellist of the Toledo Youth Orchestra, James was selected to be soloist with the TYO performing the Lalo Concerto. James studied at Bowling Green State University as a Performance Major studying with Peter Howard. While studying at BGSU he won the School's Solo Competition and subsequently performed the Dvorak Concerto with the BGSU Symphony and was also selected to be a special guest performing with the Faculty Artist in Residence String Quartet performing the Schubert Quintet in C major.

Besides his studies at BGSU James has also studied in master classes under Janos Starker and Andre Navarra. He has been a member of Adrian Symphony for 26 years where he is currently the principle cellist and has also been a member of both Toledo Symphony and Lima Symphony where he still has opportunity to be a guest performer. James has also held the position of principle cellist with the Sono Novo chamber orchestra since its inception and also has numerous opportunities to perform as a freelance musician in the greater Toledo area.

James is married to Charlene and resides in Toledo where he is continually sought out to perform as a freelance cellist.
​