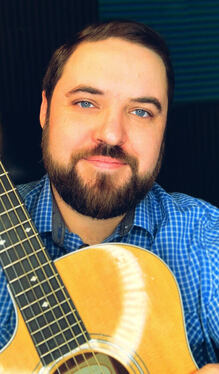 Born and raised in Sylvania, OH, Daniel started humming along with Disney songs at the age of 3. It was then that his parents knew he would have a love of music. At a young age, he joined the choir at his church and began his musical journey. Daniel got his first guitar in the 5th grade and has always had an eclectic background in his song selection. Throughout his youth, he took private lessons and performed in many shows and showcases around the Toledo and Sylvania area. At the age of 14, he saved up from summer jobs to buy his first recording software, and a love of audio engineering was born.
​
Daniel graduated from Northview High school in 2006. While in high school, he was a member of several choirs and ensembles including a jazz ensemble and an award-winning barbershop quartet. He was given several awards in his time at Northview and was the section leader of several choirs.

In 2007, Daniel was awarded a scholarship to attend Berklee College of Music in Boston, MA for vocal performance. While in Boston he played in several bands and was a member of a Berklee Acapella group. He won best vocal percussion in the acapella group at the International competition for collegiate acapella held at Lincoln Center in New York. Daniel continued creating original music at Berklee and realized a passion for lyric writing. He has performed around the country and the Toledo area since 2012 and enjoys the live music scene in Toledo! In 2013 he joined his friends at a local record label where he produces, writes, and records several artists in many different genres. At this label, he discovered a love of teaching and began his teaching career in 2015. Daniel loves sharing the knowledge he has acquired over many years. His eclectic upbringing and love of music bring a fun and energetic flair to his teaching!