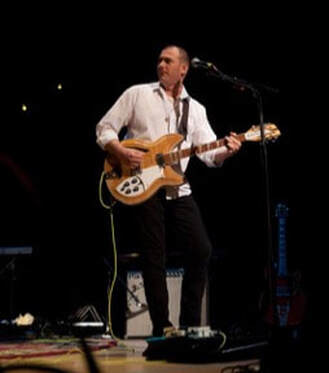 Dan is best-known for his guitar playing and song writing in Toledo Ohio. He was trained at Valley Music School in Maumee Ohio. He worked as writer and collaborator with the bands Glide, The Sprags, Vandolah, The Anti-Villains, Sangsara, and The Fairly Handsome Band. Greunke’s earliest band Glide recorded an ep (extended play 6 song release) in Chicago at Sound Works Studio in 1996.

After being featured on the fourth Sprags album “Spil Phector” and playing many shows, Dan joined a project started by Mark Hutchins in Fort Wayne Indiana called Vandolah which had 6 releases between 2003-2016. Later collaborating
with the band Sangsara he moved from guitar to bass. The Fairly Handsome Band is a hawaiian band and they were granted honorary busking permits by The City of Toledo.

​
Dan also had his hand drawn fliers featured at an art show at Weseley’s on Adams Street in Toledo Ohio. He is currently in a band called “The Bowling League” and several other fun projects, he loves to play and record songs with his wife Regina. He was also the head manager at Heights Guitars on Reynolds Road in Toledo for 12 years, and he currently teaches ukulele, bass, acoustic and electric guitar.