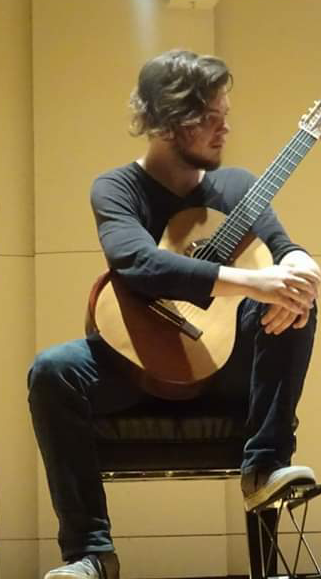 Thomas is a guitar performer, arranger, and pedagogue, who has appeared in concerts with critically acclaimed guitarists including Jiji Kim and The Romero Quartet. Thomas has created many original compositions and arrangements. He has several original baroque transcriptions of music originally for lute which are the first of their kind, including Silvius Weiss’ Suite no. 7. Dubbed “The Planet Master” by Maestra Jiji, Thomas spent 3 years creating and recording the world’s first guitar arrangement of Gustav Holst’s The Planets Suite, a project that OCU Guitar Director Stephen Lochbaum calls “a significant contribution to the guitar repertoire, along the lines of the famous Kazuhito Yamashita.”

Thomas has a master’s degree in Guitar Performance and Pedagogy with Jiji Kim at Arizona State University and has a Bachelor of Music in Guitar Performance from Oklahoma City University. He began playing guitar at age 15 with the Lone Star High School guitar program. His passion for guitar was cultivated by Christina Wagner, until he was accepted to OCU, where he studied primarily with the Guitar Foundation of America Education Director Matthew Denman. There he also studied with Kyle Patterson, Dr. Lynn McGrath, and Brian Belanus. Thomas has attended the Celedonio Romero Guitar Institute five times, where he studied with Lito, Celin, and Pepe Romero.

In addition to being an experienced performer, Thomas is also a dedicated teacher. While completing a rare master’s degree in Guitar Performance and Pedagogy at Arizona State University, Thomas worked as a collegiate level Teacher's Assistant for Maestra Jiji Kim. There he taught private lessons and group classes for undergraduate guitar majors, and conducted guitar ensemble/orchestra, while also taking many classes in guitar, jazz, and music theory pedagogy. In Oklahoma City, his work helped bring guitar education to low-income families in the OKC area. He created new curriculum and classes for the Granville School of Music and was the Director of the New Star Guitar Orchestra, a free-to-the-public community guitar orchestra. Thomas received Thumbtack’s 2015 and 2016 Best of the Year award for his private lessons. His students have been accepted to the Celedonio Romero Guitar Institute, Classen School of Advanced Studies, and have placed 1st and 3rd in Oklahoma City’s Orchestra League Competition for classical guitar.