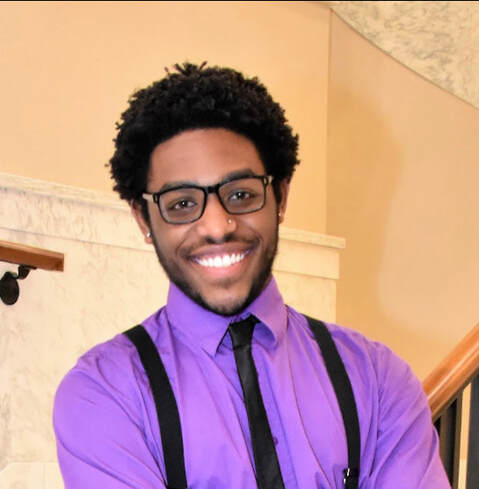 Tajj is a Senior Vocal performance major at Bowling Green State University (BGSU) from Massillon, Ohio. He sings baritone, plays piano, and drums, and writes music and poetry. He grew up playing keyboard self-taught at the age of six, joined the band as a percussionist in fifth grade, and joined choir in 6th. Throughout his early years as a musician, he enjoyed participating in musicals, drama, jazz band, marching band, OMEA All-State Choir, and other musical opportunities that came his way.

After high school, he came to BGSU where he would study vocal performance under the coaching of Myra Merritt-Grant, and in 2020 moved on to study with Keith Phares. He has also studied piano under Vanessa Kwiatkowski and Jonathan Taylor de Oliveira. Tajj found himself making music with the ensembles at BGSU, and even managed to help out in some leadership roles in doing so. He was a part of the BGSU Men’s Chorus (Baritone Section Leader 2020-22), Acapella Choir (Secretary 2019-2020), Collegiate Chorale, Afro-Caribbean Ensemble, Voices @BGSU, Ten40 Acapella (Music Director 2020-21), Phi Mu Alpha (Music Director 2020-22), Vocal Jazz Ensemble, and working as a Stanton Studio Audio Intern where he learned about audio engineering and recording. He has also enjoyed performing his own music and covers with other musicians at various places in Bowling Green, Toledo, Cleveland, and Cincinnati.

During his time in college, he has done plenty of solo and small ensemble work at the university and in professional areas. In recent years, his path has led him to perform with Toledo Opera as a chorus member in their production of “Il Trovatore”, he sang bass in Toledo Symphony Orchestra’s Messiah Chorus this winter, played the role of Jon Stewart in Andy Junttonen’s “State of the Union” for the BGSU MicroOperas, and played Mars in Offenbach’s “Orpheus in the Underworld”. In addition, just this past summer, he worked with Toledo Repertoire in their production of “In the Heights” playing the role of Benny. He will begin preparing for his recital in the spring as he plans to graduate in the fall of 2023.

Tajj is excited to teach at Forté, and share true musicality and positivity with his new students.