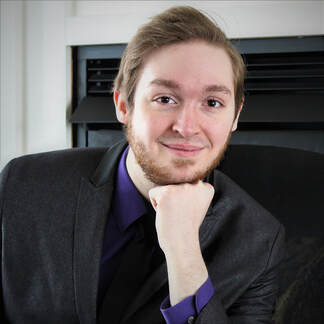 Seth Johnson is an accomplished singer and teacher with a passion for opera. Originally from Illinois, he is a graduate of Bradley University in Peoria, Illinois, with a Bachelor of Music in Vocal Performance. During his time in Peoria, his interest in opera was piqued through his work with groups such as Opera Illinois and Opera Youth Outreach.

Shortly after graduating, Seth moved from Illinois to Ohio where he began the work of breaking into the local opera scene. Since then, he has worked with several different opera companies in several capacities, including as a performer in various roles with Toledo Opera and Michigan Opera Theatre, both front of house manager and resident artist at Ohio Light Opera, and education administrator at Great Lakes Light Opera. Throughout his time on the stage, Johnson has performed such roles as Nemorino in L’elisir d’amore, Archibald Grosvenor in Patience, and Vanderdendur in Candide with both Ohio Light Opera and Michigan Opera Theatre.

​Most recently, Seth completed his Master’s in Vocal Performance at the University of Toledo. When he is not performing, Mr. Johnson teaches Voice, Class Piano, and Music Business at Owens Community College in Perrysburg, OH as well as private lessons in both voice and piano.