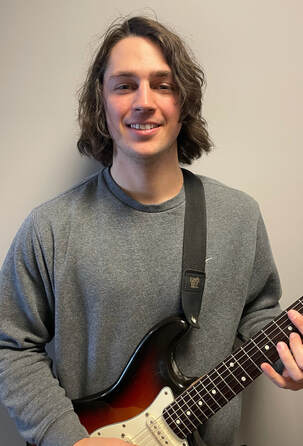 Cam began his study of music with private guitar lessons near his hometown in Ohio at a young age. His formal study of music began at Terra State Community College in 2016, where he studied with Michael Shirtz in the Fusion Jazz Quartet. He then transferred to BGSU in 2017, where he studied Jazz Guitar and Jazz Piano with Ariel Kasler. In 2020, he received his degree in Political Science with a minor in Music from BGSU. He is in demand as a performer across many genres on his principal instrument of guitar including Jazz, Rock, and Pop.

In addition to his academic work, Cam has also worked extensively as a freelance stagehand for area and regional companies, doing production work for acts such as The Oak Ridge Boys, Robben Ford, Montgomery Gentry, Brothers Osborne and many others. Cam's production work has also brought him to Dallas, Texas to manage the Vocal Jazz Stage at the JENerations Jazz Festival, an educational and networking conference for Jazz musicians and educators.